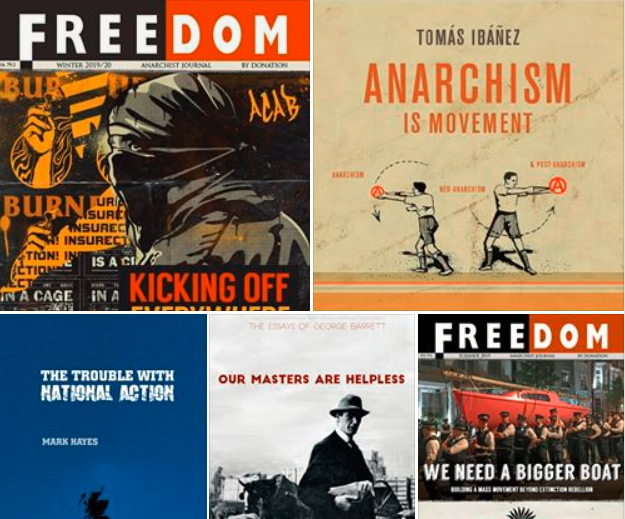 Now that our latest journal and Anarchism is Movement have arrived that’s our publishing done for 2019! Over the last three years we’ve published nine titles with a really broad spectrum of topics, from our updated titles like Why Work? (which will hopefully be out in another new edition again next year) and deep ecology to bringing historic authors back into print and interrogating rough sleeping.

With several titles already being planned for 2020 we are bringing out more books now that at any time since the 1990s — not too bad for an all-volunteer team! If you’re interested in getting involved btw, be it through direct selling in your home town, heading to bookfairs with a bag full of paper, reading through text for errors or promoting our wares to potential new outlets we’re always looking for new folks, please do get in touch via publishing [at] freedompress.org.uk!

This year we brought out, alongside our two free journals, Mark Hayes’ analysis of National Action and two titles which sit almost directly opposite each other thematically but are ultimately complimentary reads.

Anarchism is Movement is characterised by Tomas Ibanez pitching our praxis as fluid, alive and freeing itself from the weight of its fixation with a failed 20th century heyday. It’s a dense, thoughtful and rewarding read that swipes at “guardians of the temple” who try to wrap the ideology in the beards of its founders. As the oldest anarchist press in the English-speaking world and a habitual publisher of old beards we couldn’t possibly comment 😉.

Our Masters are Helpess meanwhile brings together the best works one of those early pioneers, George Barrett, whose writing in the 1910s at the time of the Great Unrest came direct from the Utopian communist period when it was at its most feisty. An extraordinarily clear and accessible writer, Barrett’s explanations of anarchist critiques of power ring as true today as they did then, while the collation of his news reports by editor Iain McKay lend a sense of the urgent activity that was taking place in the run-up to World War I.

The looking forward of Ibanez and historic agitation of Barrett seem then to be at odds. But in reading both I personally found forms of kindred spirit, ultimately focused on a task that is simultaneously monumental and very, very simple. To take the world as it stands and seize every opportunity to better it, to imbue as many people as possible with the confidence and ambition necessary to destroy the monsters that humanity feeds.