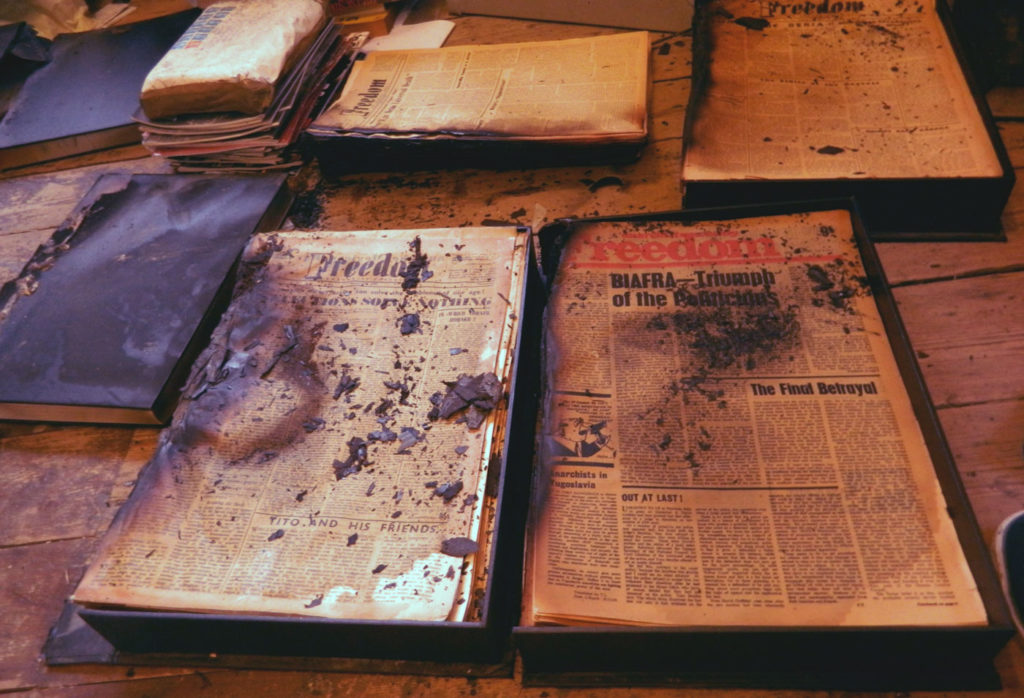 When an unknown attacker tried to burn Freedom Press down in 2013 they very nearly destroyed archives of our newspaper which go back to the 1920s – so now we’re working on restoring them.

The Freedom Newspaper archive is one of the most important for British anarchism. Not necessarily because it always had the best writing, but because of its sheer consistency. The archive we hold charts a continuous presence in libertarian publishing and reporting stretching through to 1946, and includes Tom Keell’s 1920s-30s Freedom Journal. That means most major events for the anarchists can be found therein, along with the all-important listings which hint at the ebb and flow of the movement itself over the last 70 years.

We have been extraordinarily lucky on a number of counts in the last few years to have retained such a full store of copies of the paper, which isn’t matched as yet by our somewhat patchy archive of books. If the fire had done its intended job we would have found ourselves, as in 1945, looking at a sad pile of ashes where the work of decades had once been. 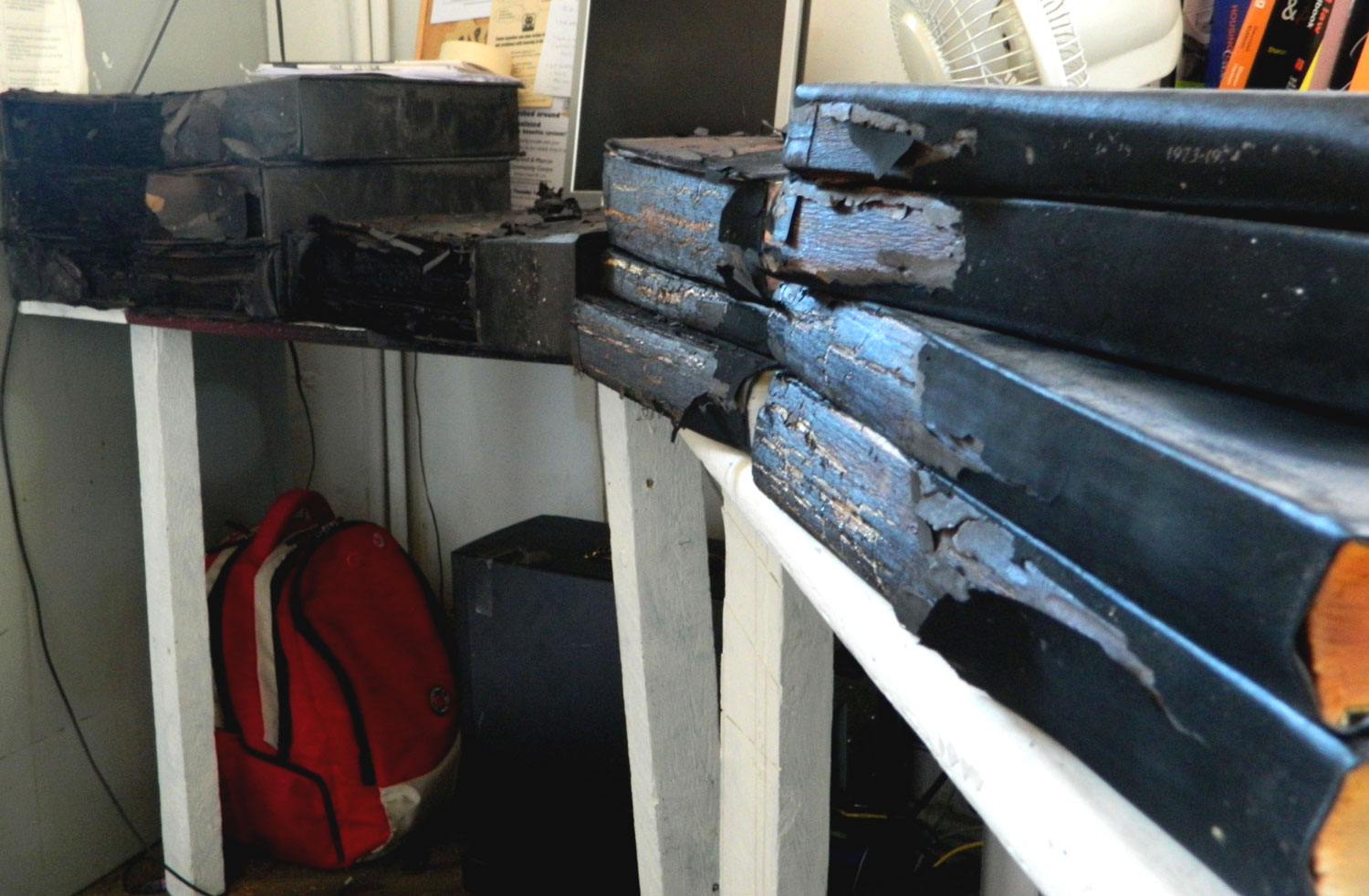 The culprit of our first major archive loss 74 years ago was a Luftwaffe bomb, which crashed through the ceiling of the recently-established Freedom Bookshop, then based opposite Conway Hall in Red Lion Passage, and burned the entire building, along with its store of printed works stretching back to Freedom’s founding in 1886, to the ground.

After the war Freedom established its printer in Angel Alley while operating mostly from Fulham, before moving into our current home in 1968, and the press has kept an archive of everything produced in that period through thick and thin, no matter how tiny or dysfunctional the collective sometimes became. For the most part it escaped years of political upheaval unscathed, despite a near miss when fascist group Combat 18 firebombed the building in 1993, an attack which gutted the ground floor but never made it up to the attic where our papers were being stored.

As time went on, the papers continued to pile up until in 2012, or thereabouts, the first fortuitous decision was made for the future of the archives. With multiple copies available, we sent the sets to Bishopsgate, which was able to use them to build two libraries, one held safe at the Institute, one professionally bound and returned to the Press. These were, in an egalitarian but ultimately dangerous decision, then kept downstairs in the shop for visitors to look through.

A year later, it is likely bootboy inheritors of the fascists’ creed were again responsible for yet another attempt to burn the building down. Someone, never identified by police, broke a window on the ground floor in the early hours of February 1st, poured some lighter fluid on the floor and set fire to it.

By sheer chance, someone saw the smoke and called 999. The fire brigade arrived in time to put it out – a matter of seconds before the archives, already singing in the heat, would have gone up in flames. Their escape was little short of miraculous but even so, the damage was extensive. 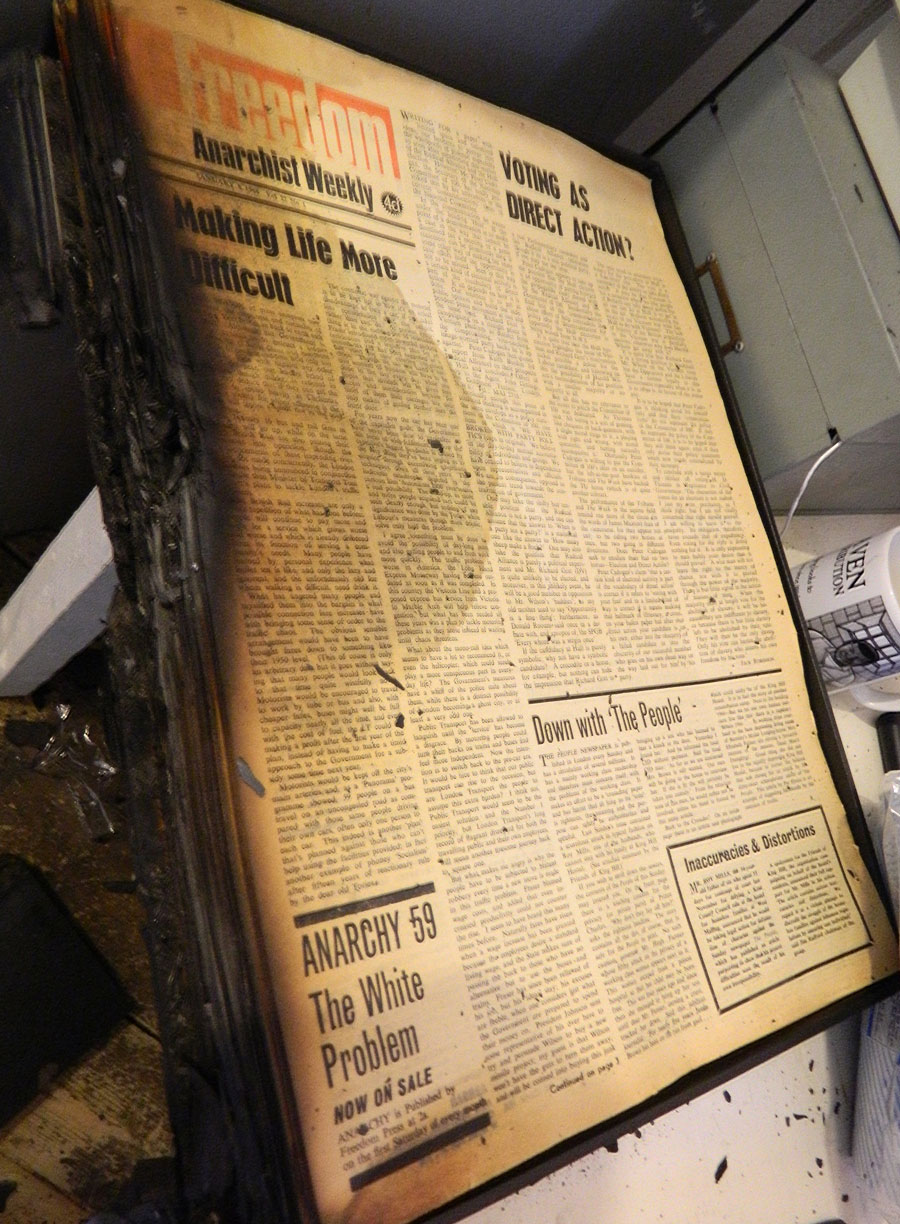 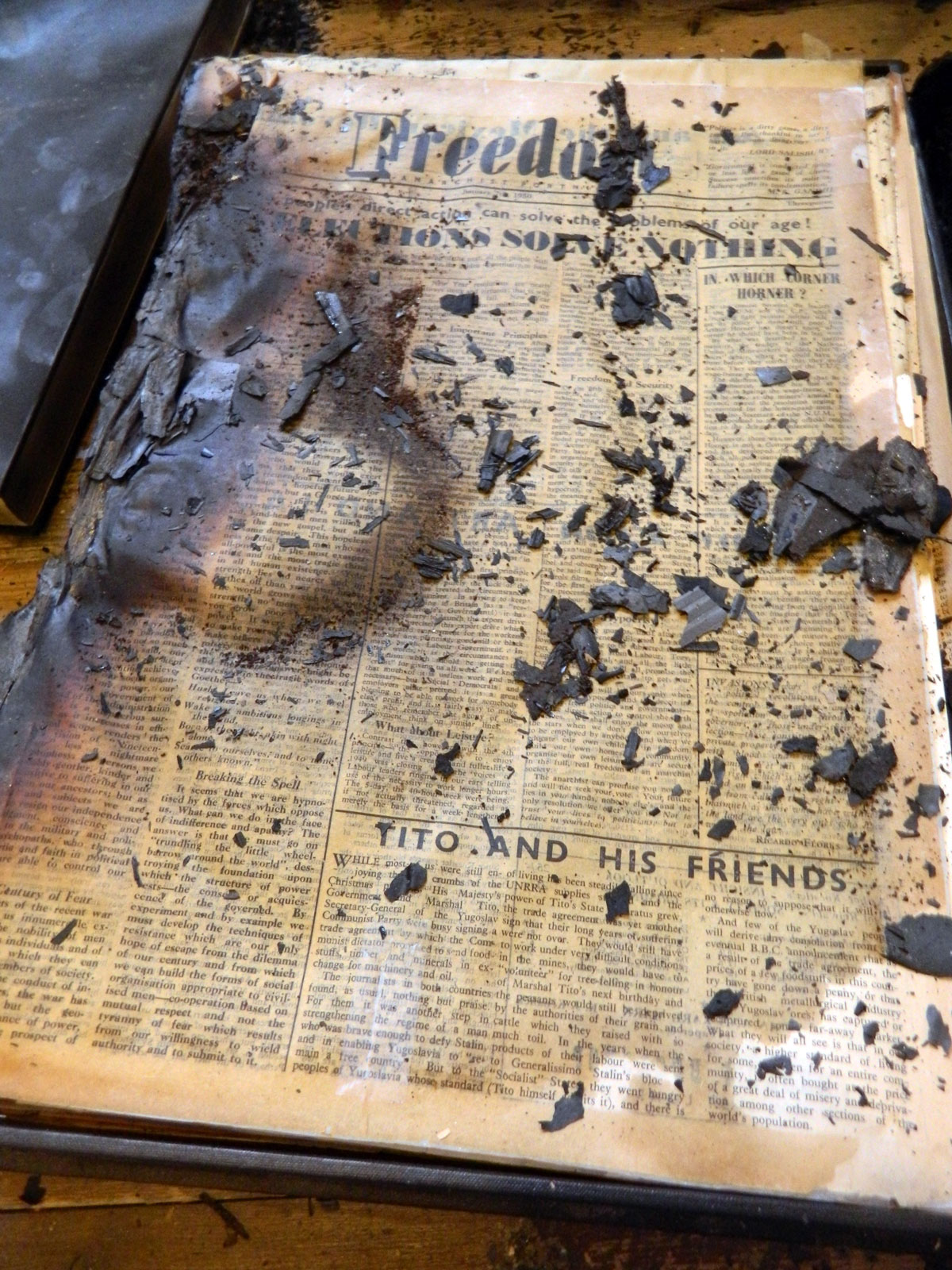 It took some time to recover from the fire downstairs, and longer to get to where we are now, running a fully-stocked shop, publishing new books and maintaining our daily newswire. What remained of the archives was thus stored upstairs and has until now been largely forgotten about.

In the meantime however we had another stroke of luck, in the form of two major donations of papers covering the 1960s (a particularly badly-burned section) and the 1970s-1980s. So when we came to go over our stocks, were were able to replace many of the burned papers with pristine copies. Earlier this week a couple of volunteers went through the entire stack, and we managed to find issues for the vast majority over the course of a day, while retaining a good chunk of worthwhile duplicates as well.

This was a hefty task as despite some preparatory work, a large number of the approximately 2,000 issues we were looking to find copies of were buried in stacks of donated copies. Because of the damage to originals and the archive boxes many of our existing properly ordered stacks were both hideously fragile, and prone to dropping ash everywhere if disturbed. Even pulling out individual issues from burned stacks to fill out gaps for donated years of better-quality papers was an exercise  in extreme care and increasingly grubby fingers. 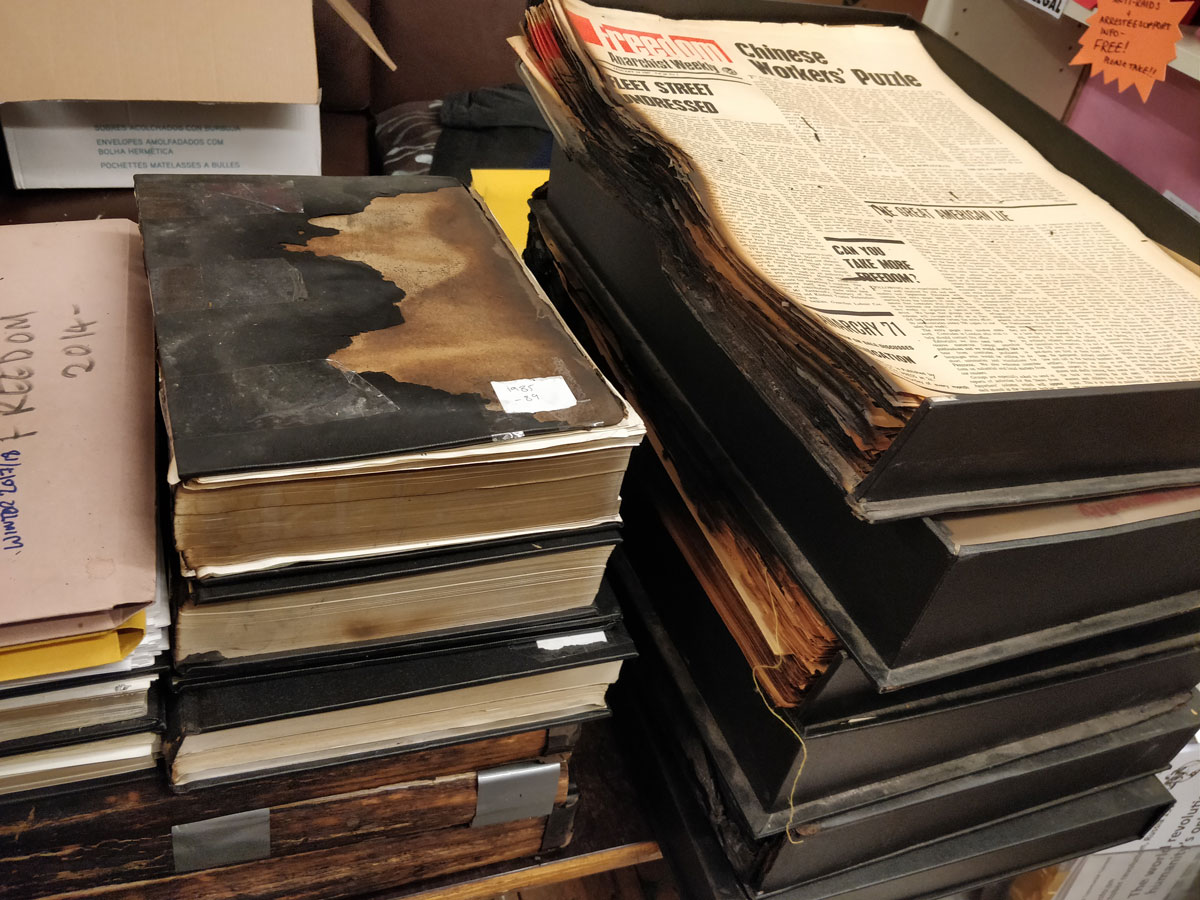 Eventually however we managed to sort the last of the stacks out, and this was the result – a chronologically-ordered series running from 1946-2019, bar some individual issues here and there and a largeish gap in the 2000s. 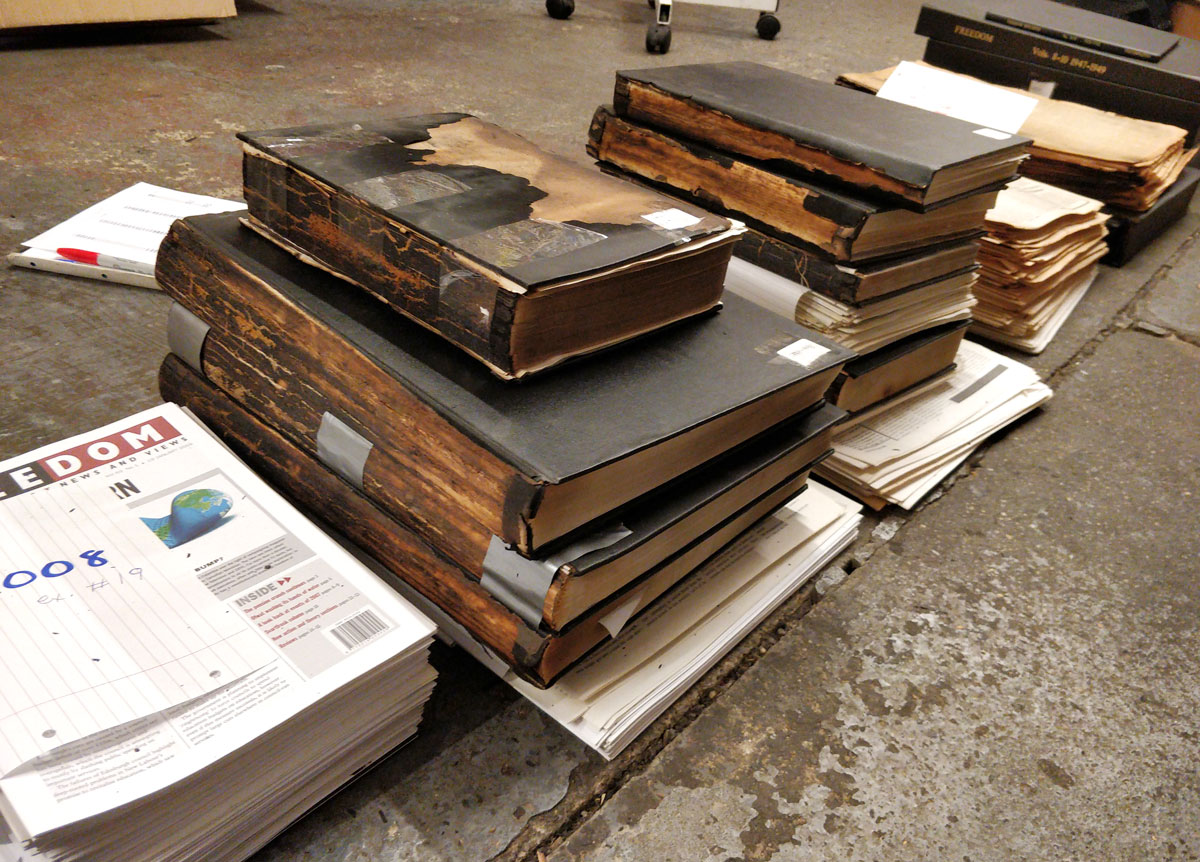 We have a shortlist of papers we’re still missing, which we’ll be asking around for to try and get our set back up to full strength:

Amazingly we do have access to a large proportion of the missing stacks, because in the course of building our extensive online archive the 1886-1927, 1936-45 and 2000s periods have all turned up digital versions. We will however be actively looking for hardcopies to make sure we have a physical store as well – if you have any please do send them in!

As can be seen from our pictures, the boxes and spines of the original sets were badly damaged and need replacing. Some will have to be repaired while others are currently in random cardboard boxes which could also do with replacing. We have some plans for getting hold of proper acid free archival boxes but will need to raise some funds as specialist kit can be very expensive – in the order of hundreds of pounds. If you’d like to help with cash for the preservation process, please do drop us a donation here. 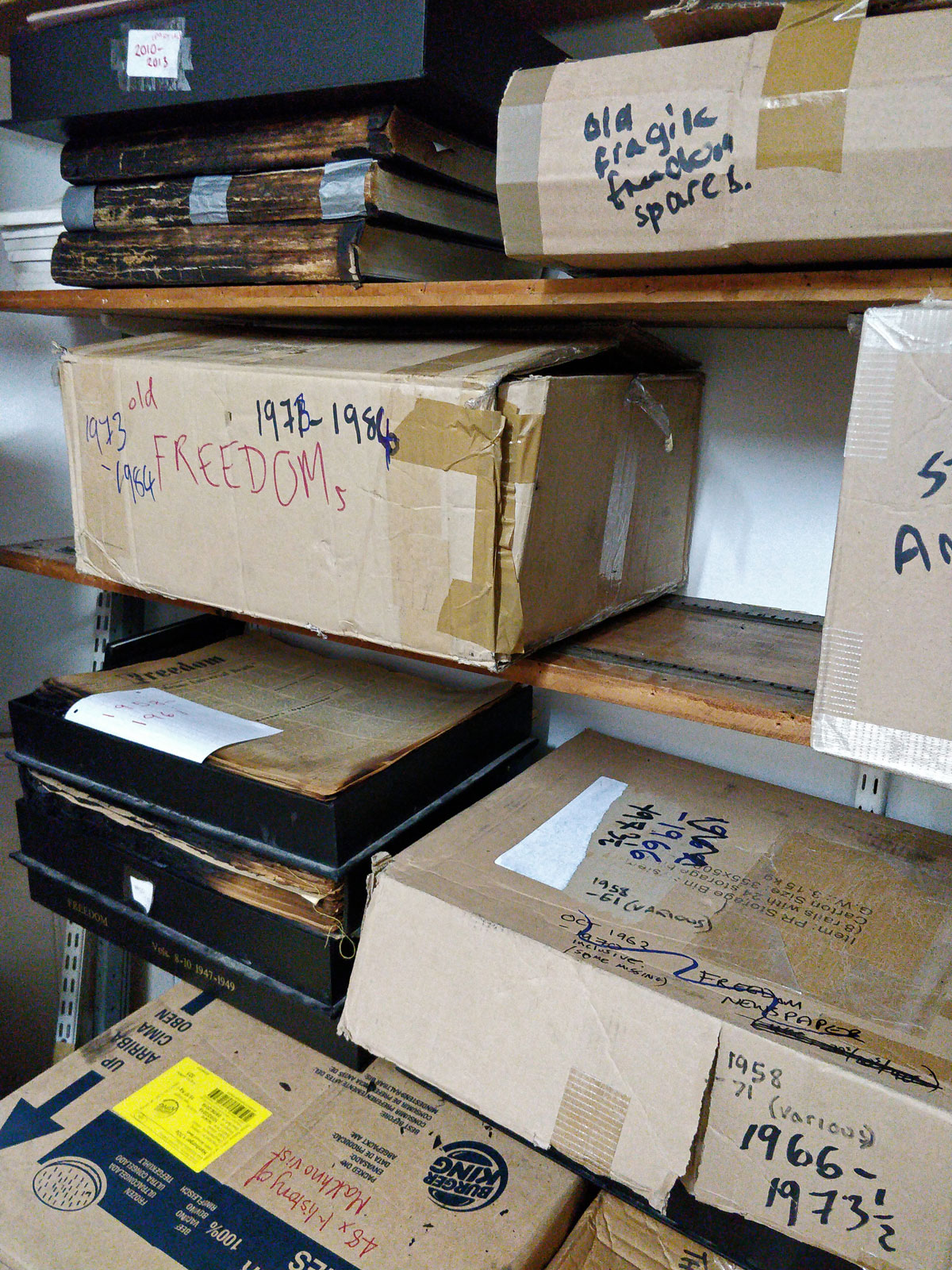 Finally, now we have a properly organised set we can get on with digitising more papers. As it stands we’re a little more than a third of the way through the process, and there’s a great deal still to be done in digitising particularly the 1980s and ’90s. Keep an eye on our social media for updates on how we’re getting on!

A much fuller account of the various attempts fascists have made to burn down Freedom can be found in our recently-released book A Beautiful Idea: History of the Freedom Press Anarchists.