Pit Sense versus the State

From the blurb:
This book is first of all about militant working class activity, showing just what ordinary people can do when they put their mind to it. It centres on the miner’s strike of 84/85 but includes material from both before and after that battle and is relevant to all industrial fights, not just the one that it describes and analyses. Unlike most accounts of working class resistance it is written by a working class insider, not a middle class outsider. The author, Dave Douglass, was NUM branch delegate at Hatfield Main Colliery and, as this account shows, was heavily involved in the picketing. As someone or other remarked, “The emancipation of the working class is the task of the working class themselves” and pit Sense versus the State takes that statement at its word. So the book attacks those outsiders, including the Left, who criticised the miners from the safety and ignorance of outside. It is a warts and all portrait, admitting mistakes that were made and showing the differences of opinion between the miners themselves. It includes extracts from both the local picket log of the strike, and the union meetings held during the strike. It is not an exhaustive history of the Doncaster miners or even of the 84/85 strike. It is a fiery page in the history of the british working class, a history that continues despite the closure of the pits at Hatfield and elsewhere. 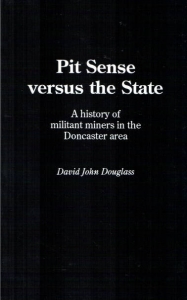