Nine tenths of the law

How does “property” fit into designs for an equitable society? Nine-Tenths of the Law examines the history of squatting and property struggles in the US, from colonialism to 20th-century urban squatting and the foreclosure crisis of the late 2000s, and how such resistance movements shape the law. Squatting is defined by Dobbz as “occupying an otherwise abandoned structure without exchanging money or engaging in a formal permissive agreement.” Stories from the most hard-hit American cities show that property is truly in crisis:

One in five homes in Buffalo, NY, are abandoned. The US national housing vacancy rate is 14 percent. If a house were given to every homeless person in the United States two-thirds of that stock would remain empty. In May of 2011, 1 in every 103 homes in Nevada was in foreclosure.

Nine-Tenths of the Law expands our understanding of property law and highlights recent tactics like creative squatting ventures and the use of adverse possession to claim title to vacant homes. Hannah Dobbz unveils the tangled relationship Americans have always had in creating and sustaining healthy communities.

Hannah Dobbz is a writer, editor, filmmaker, and former squatter. In 2007 she produced Shelter, a film about squatters in the Bay Area. The film has screened widely at universities, bookstores, and community spaces, as well as at the 2009 Three Rivers Film Festival in Pittsburgh. Nine-Tenths of the Law is her first book. 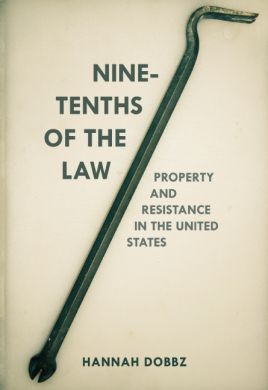