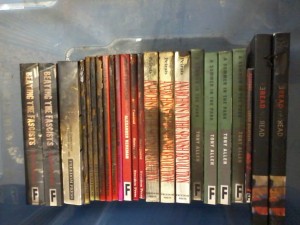 In February 2013 the shop was set on fire in the early hours of the morning. The response from everyone was great and loads of money was raised in the following months from all over the world. Those donations helped us pay to replace the ceiling in the shop, replace all the shelving, repaint the floor, get a new fire alarm, replace the lighting, replaced the sash window, replace and reinforce the outside doors, welded new locks to our shutters, fix some water piping and replace meter as well as the cost of cleaning, of which there was loads. The donations also helped us to pay the bills that we couldn’t have afforded otherwise what with all the to-do. We’re really grateful to everyone who put so much work into supporting us through that time.

When we were doing the great-end-of-2014-stock-check a few more burnt copies of Freedom Press titles were found hidden upstairs. As there was a great demand for these souvenirs after the fire we are going to sell them to raise money for the repairs that are still ongoing…

The main projects we have at the moment are replacing our central heating system that was broken during the fire and redoing all the internal doors and the hallway so that we’re more fire resistant than we’ve ever been before!

You can buy them here.

Non-burnt copies of these books are all available for their normal price elsewhere on the website.