The Tradition of Workers’ Control

“Workers’ control of industry”, a phrase coined by the Guild Socialists recalls the libertarian aspirations of the first rebels against the slavery inherent in the capitalist mode of production. The new socialism adopted by the Fabian Society in the 1880s, and later by the Labour Party, is sharply different from both the Marxist and anti-state or anarchist versions of socialism, in that it is based in the use of the existing political structure. For a generation after 1918, socialists, both radical and moderate, could persuade themselves that the direction of the Labour Party, if not the pace, was correct. It is now apparent that the Labour Party is the harbinger of the ‘managerial revolution’, the peaceful emergence of a new ruling class of mangers. We are as far as ever from the realisation of a society which a William Morris or a James Connolly would recognise as socialist. What is wrong with Labour Party socialism is not its pace but its direction. As Geoffrey Ostergaard shows, however, libertarian socialism is not dead. There are workers in Britain who own and control their workplaces, and although this movement of worker’s control in industry is not large, it is flourishing. 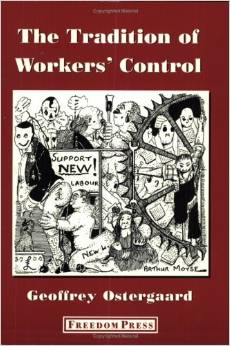