Mutual Aid: A Factor of Evolution

Mutual Aid: A Factor of Evolution is Kropotkin’s most influential work. A challenge to classical Darwinism, Kropotkin argues that in nature, co-operation is as important as competition.

This new edition includes an introduction by Donald Rooum and historical preface by Iain McKay.

“Kropotkin … has adduced a large and interesting body of facts, showing the great prevalence of the principle of co-oper­ation in organic nature … [A]ll cases of mutual aid or co-operation, whether within or beyond the limits of species, are cases which fall under the sweep of Darwin’s theory.” George John Romanes (1892)

“Mutual Aid will never be more out of date than will the Declaration of Independence. New facts may increasingly become available, but we can already see that they will serve to support Kropotkin’s conclusion that ‘in the ethical progress of man, mutual support – not mutual struggle – has had the leading part’.” Ashley Montague

“Kropotkin … was one of the first systematic students of animal communities, and may be regarded as the founder of modern social ecology.” Alex Comfort

“Modern observations have only confirmed the formidable mass of evidence which Kropotkin brought together in Mutual Aid. Sociability has a pre-human origin, and mutual aid lies at the heart of all social instititutions.” John Hewetson

“I would hold that Kropotkin’s basic argument is correct. Struggle does occur in many modes, and some lead to co-operation among members of a species as the best pathway to advantage for individuals. If Kropotkin overemphasised mutual aid, most Darwinians in Western Europe had overemphasised competition just as strongly. And if Kropotkin drew inappropriate hope for social reform from his concept of nature, other Darwinians had erred just as firmly (and for motives which most of us would now decry) in justifying imperial conquest, racism, and oppression of industrial workers as the harsh outcome of natural selection in the competitive mode.” Stephen Jay Gould

This book was reviewed in Organise! 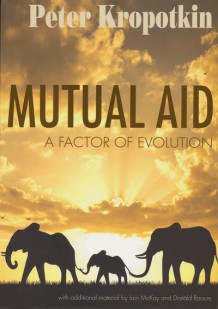