One Game at a Time

We need to take sports seriously. Football, baseball, mixed martial arts, hockey, and beyond: these are arenas of immense power, with a mass appeal. Yet intellectuals have long since abandoned the sporting world as a legitimate site of contestation and innovation. Why? What do we gain by handing over the persuasive power of sports to the worst elements of our culture, by allowing sports to become plagued by hyper-consumption, militarism, violence, sexism, and homophobia? According to Matt Hern, not a whole lot.

In a series of interconnected narratives from his forty-plus years of sports fanaticism, Hern makes an impassioned and entertaining plea for a more active engagement with sports, physically and intellectually. Hern’s eye is critical and his analysis sharp, but this book is more than a critique—it’s a celebration of what sports have taught us, and a suggestion of how much more we still have to learn.

Fun, engaging, and fast-paced, One Game at a Time is for anyone willing to get their head into the game.

Matt Hern lives and works in east Vancouver, where he founded the Purple Thistle Center and Car-Free Vancouver Day. A former sportswriter and a radical urbanist whose writing has been published on six continents and in ten languages, he is the author of Common Ground in a Liquid City (AK Press, 2010), which was shortlisted for the Vancouver Book Award. 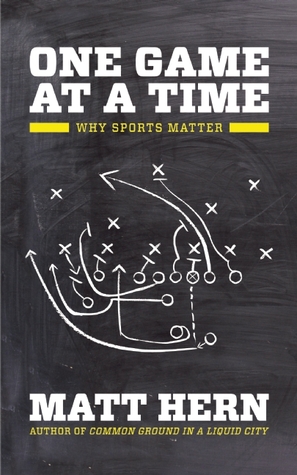