The acclaimed art fanzine’s psychogeographic drifts through a ruined city

Savage Messiah collects the entire set of Laura Grace Ford’s fanzine to date. Part graphic novel, part artwork, the book is both an angry polemic against the marginalisation of the city’s working class and an exploration of the cracks that open up in urban space.

“A wake-up call to anyone who can only see modern cities through the lens of gentrification.”

“This black-and-white, cut ’n’ paste-style zine by Ford, in which she traces her psychogeographical drifts around London’s grimey underbelly, has achieved cult status in art circles since its first issue in 2005. Be warned: this is a city you won’t find in any guidebook.”

“A delirious, doomstruck celebration of squats, riots, vandalism, isolation, alcohol, and sex with strangers, all on the terrain of a half-historical, half-imaginary city that the people who Ford follows, herself at the center, can in moments believe they built themselves, and can tear down as they choose.”

“Ford displays authentic gifts as a recorder and mapper of terrain. She is a necessary kind of writer, smart enough to bring document and poetry together in a scissors-and-paste, post-authorial form.”

“One of the most striking fanzines of recent years … focusing on the politics, psychology and pop-cultural past of a different London postcode. Ford’s prose is scabrous and melancholic, incorporating theoretical shards from Guy Debord and Marc Augé, and mapping the transformations to the capital that the property boom and neoliberalist economics have wrought. Each zine is a drift, a wander through landscape that echoes certain strands of contemporary psychogeography. Ford—or a version of her, at least—is an occasional character, offering up narcotic memories of a forgotten metropolis. The images, hand-drawn, photographed and messily laid out, suggest both outtakes from a Sophie Calle project and the dust jacket of an early 1980s anarcho-punk compilation record: that is, both poetry and protest.”

“Savage Messiah’s fractured narratives, clipped sloganeering and topographical poetics have been, for the last decade or so, a kind of solace for anyone who loathed the coked-up arrogance, the intellectual and political vacuity and compulsory amnesia of the boom. It was a constant reminder that bad times were just around the corner.”

– Owen Hatherley, author of A Guide to the New Ruins of Great Britain

“The consumer-friendly face of neoliberal Britain gets an anarchic makeover in Ford’s politically biting work … No false promises of a brighter, better, more sanitised tomorrow here. Instead, she focuses on areas haunted by an urban dispossessed, which regeneration seeks to concrete over: city wastelands where fortress-like old tower-blocks rise, with their Escher-like walkways and bleak ‘recreational’ open spaces.”

“There is poetry … there is anger … there are calls to arms … and thankfully, there is humour.”

“No exercise in style nostalgia, this is her recovery of punk’s provocation and politicization.”

“Looking at Ford’s work, one sees the last three decades of urban flux laid out as singular snapshots—from the infinite, utopic possibilities of abandoned land that rave culture picked up, to the increasing civic and corporate control of space.”

“What made Savage Messiah so interesting was … its dialectical montage, its lost futures erupting into and over-running the seamless, optimistic spectacle of redevelopment and speculation—because it imagined other futures than the one being sold so extortionately to Londoners. It held out the promise of another modernism, of things no longer going on as they are.” 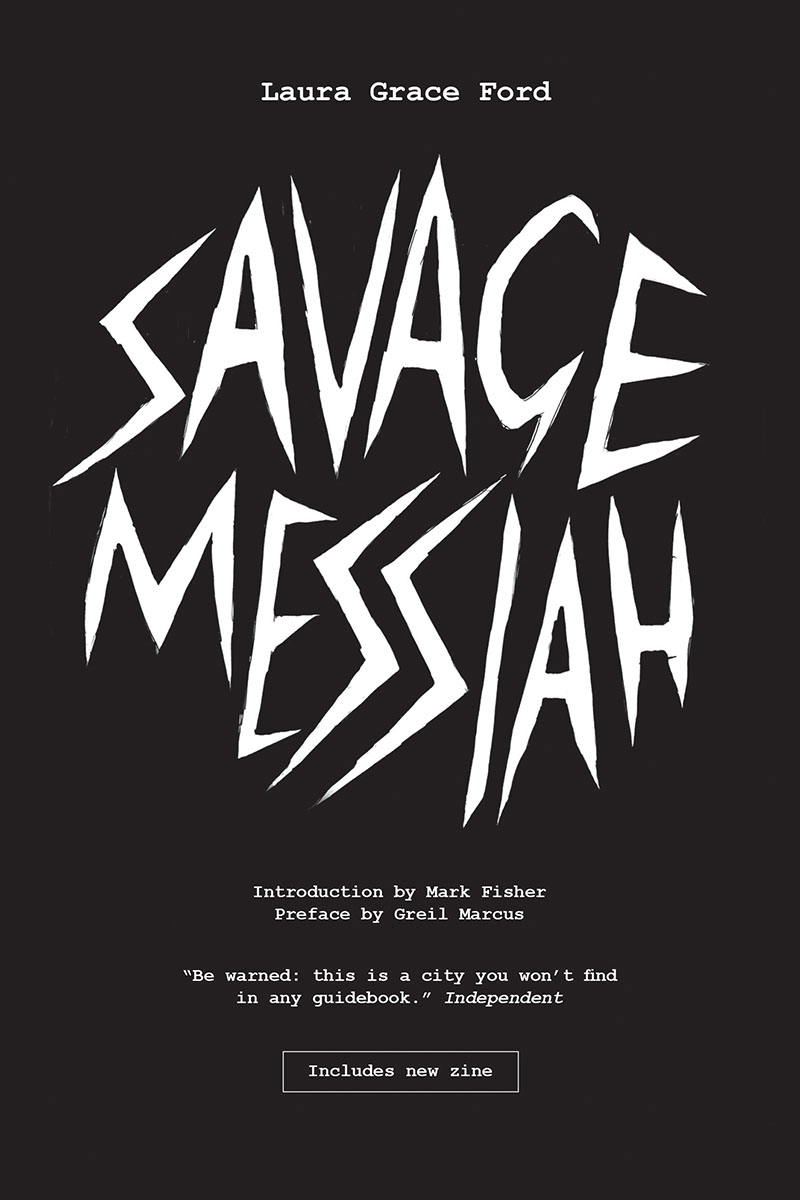