From the blurb:
Fredy Perlman’s shorter writings, the most important of them collected here, chart an intellectual exploration from the student (and other) revolutions of 1968, in which Fredy took part in France and Italy, to the ecological concerns of today. The changes in Fredy’s analyses, from Marxist economics to an anti-industrial perspective, produced contradictions which the reader will have to resolve because Fredy died in 1985. It seems Fredy was too busy developing new ideas to go back and modify his earlier ones. Be that as it may, his insights into industrialisation, the nation-state and imperialism, racism and genocide, the psychology of power and dependency, are some of the most important in recent libertarian thought.

The title of this collection comes from one of Fredy’s earlier essays in which he expresses his hopeful outlook on prospects for social change. In subsequent texts, to, he reminds us that the authority wielded by the institutions that oppress us comes from our acquiescence. Witholding recognition of that authority would mean that Anything Could Happen. 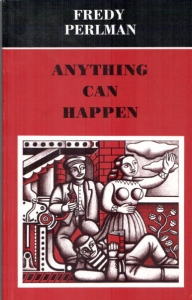