Luke Roberts had this to say about Scammer: “Flaubert said with my burned hand I write about fire. In Scammer, Dom Hale plunges his whole head into the datastream, dictating his blips and theme songs through mouthfuls of toxic waste. He has his own venom: it’s about style and it’s about form. These poems don’t just sprinkle on a little diction or flip a filter on or off. They’re not accessories. They perform increasingly desperate attempts to find some texture in the frictionless glow of the screen. What’s the etymology of scam? What was your mother’s maiden name? How much surplus value did Silicon Valley extract since the start of this sentence? What year is this? What’s happening? What the actual fuck? Frack the Millenium Dome. Poison the Cabinet. Napalm Eton. Cancel the biopic of Northern Rock. Scammer is what we’ve been asking for in our sleep. A diagram of dead ends. A blueprint of cracks in the infrastructure. It reads just as good forwards as backwards, at any speed, straight to the head. You could cook an egg on it. You could cook two. It’s legit.”

‘[In Scammer] poetry is pitted against the ability to survive the everyday economies of making ends meet. It signals a larger background of sustenance, a whole undisclosed sphere which undergirds the year-long writing of the poem yet cannot be easily verbalised. The gloss we can give to the gap between this sphere and ‘The Noughties’’s own enactment is a no, a refusal to make the link between the circuits words take on page and those of the background out of which they emerge. There is a doubleness to ‘now, now’, shading over to both ‘no, no’ but also that the poem must return to its present elaboration, the site of its self-recognition. Reading this gap as a refusal opens the possibility that the poem’s own dynamics—the very rhythms it falls into, its very online texture—can militate against the extension of working life into non-working life.’

‘The best poetry does teach us how the form of life makes life (im-) possible, not how (only) life is translated into forms. I wrote this in my notebook at the end of your poem and I think what I mean is that poetry like Scammer is able to capture the affective flattening-out of computer-mediation but not stop there, as so much would, but to understand that such an affective equivalence is the engine of value-scraping and data-accumulation, and it does this because you thematise those parts of the occluded subject in subjection to the object they are inside: ‘Every clause / a tab against despair.’ In the onrush of zeal and futurity upon which the poem insists, the spirited insouciance here could easily be missed, but it is there nevertheless, quite possibly only in the line-break itself. The way that the poem insists on wit as the derivative of knowledge and pleasure is itself the medium through which the poem contains a pedagogy’.

Dom Hale lives in Lancashire. He edited the magazine Mote and helped to organise the reading series JUST NOT. Addons was published by Gong Farm in February and a book is forthcoming from the87press. 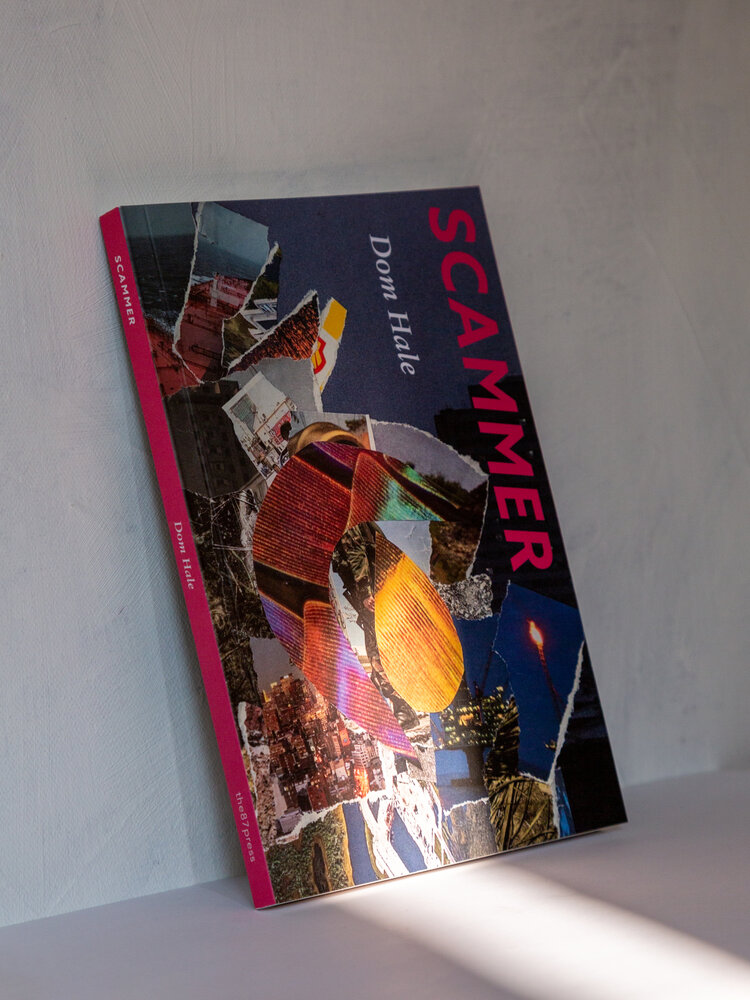