A truly radical response to conservative heritage tours and banal day trips, Rebel Footprints brings to life the history of social movements in England’s capital. this book transports readers from well-known landmarks to history-making hidden corners, while telling the story of protest and struggle in London from the early nineteenth to the mid-twentieth century.

From  suffragettes to  socialists, from  chartists to  trade unionists: the book invites the reader to step into the footprints of a diverse cast of dedicated fighters for social justice. Individual chapters highlight particular struggles and their participants, from famous faces to lesser-known luminaries. It sets London’s radical campaigners against the backdrop of the city’s multi-faceted development. Self-directed walks pair with narratives that seamlessly blend history, politics and geography. Specially commissioned maps and illustrations immerse the reader in the story of the city.

Whether visiting it for the first time, or born and raised in it, this book invites the reader to see London as never before: the nation’s capital as its radical centre.

Foreword by Billy Bragg
Introduction
1. Rebellious City: London from the 1830s to the 1930s
2. Trailblazers for Democracy in Clerkenwell Green
3. The Spark of Rebellion in Bow
4. Coming in from the Cold: Immigrant Agitators and Radicals in Spitalfields
5. No Gods, No Masters: Radical Bloomsbury
6. Stirrings from the South: the Battersea Four
7. Speaking Truth to Power: Suffragettes and Westminster
8. Not Afraid of the Prison Walls: Rebel Women and Men of Poplar
9. People’s Power in Bermondsey
10. No Pasaran!: Cable Street and Long Lane
Conclusion

What they say about Rebel Footprints

“You haven’t walked the streets of London unless you’ve understood the secret history of revolt, rebellion and poverty hidden all around you in its bricks and alleyways. Rosenberg takes you there as no other writer has done.” Paul Mason, Channel 4 broadcaster and writer

“This brilliant book brings London’s long tradition of radicalism and rebellion to life. Using walks to show how dissent led to democracy, it is a fitting testimonial to the collective struggles of Londoners of every colour and creed. At a time when our capital is increasingly dominated by the interests of the global super rich, this is a timely reminder that many of the rights we now take for granted were won by ordinary working-class people. I for one will be dusting down my walking shoes and taking to the streets to find out more”. Frances O’Grady, General Secretary, TUC

“David has brought the streets and buildings of London alive to the real history of the city and the struggles of ordinary people. Migrants from far and near and poor and exploited took up the cudgels for decent housing, the right to vote, the dangerous working conditions and to unite all communities against Mosley and his Nazis…this book brings alive the memory of ordinary people doing extraordinary things…Anyone reading this will walk the streets of our city with a different view of the world, and what people can do when they act together.” Jeremy Corbyn MP 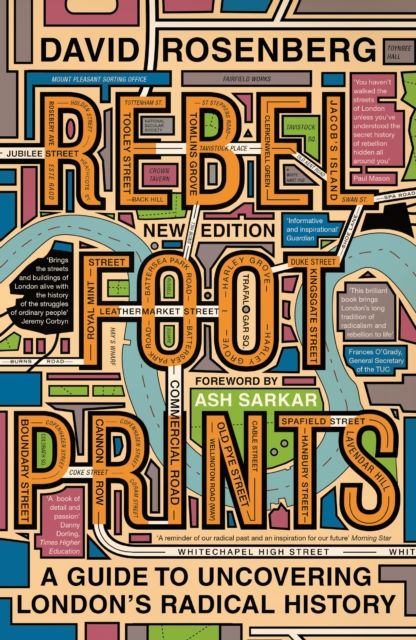