Words in the Snow

From the blurb:
The “Filandon” in Hay-on-Wye. This volume collects the tales that are the basis for Aparicio, Diez and Merino’s “Filandon”: that is, very short stories of a genre reborn midway through the twentieth century and known variously as the micro-story, min-fiction or mini-tale – specialists can’t quite settle on the most appropriate term for it- currently booming in Latin America and Spain. A genre distinguished for its brevity, dramatic intensity, an expressive concision, a capacity for suggestion and a formal autonomy that is typical of the literary Short Story; a genre eager for experimentation and the rebuilding of certain archetypes.
In September 2006, this “Filandon” was presented in the Hay-on-Wye festival in Segovia, Spain, to great acclaim. In January 2007, the three authors repeated the experience in Cartagena de Indias, Columbia, also within the framework of the Hay-on-Wye festival; roused to a standing ovation and fervent calls of ‘bravo’, the audience’s reaction had all the clamour and warmth of an unforgettable musical or operatic evening.

In Castillian and English 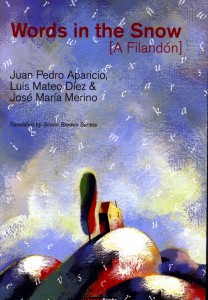