In March 1960 a demonstration called by the Pan-African Congress, in protest against the pass laws, took place in Sharpeville, a township near Vereeniging. The violence used by the police against the non-violent protesters was said to have ‘shocked’ hard-bitten South African newsmen and even some of the police. Fifty six Africans – men, women and children – were killed by the police; some 160 were injured.

Dr Verwoerd and his white government had won the day. The 10to 1 black majority retired defeated: their stones no match for Verwoerd’s machine guns, until David Pratt shot at the mastermind of Apartheid in South Africa, the symbol of white supremacy and all the injustices that had existed from the moment the white colonists had invaded the African continent. Dr Verwoerd survived and the editorial writer for  Freedom (weekly) at the time, expressed  his disappointment with an editorial,  ‘Too Bad He Missed’. That particular issue of Freedom (April 16, 1960) coincided with an Aldermaston march organised by the CND at which the anarchists had marchers and literature sellers. Little did he realise that the editorial would ruffle so many pacifist feathers among those readers of Freedom who considered themselves anarchists.

Since the violence – non-violence issue among anarchists shows no signs of abating over the years (as evidenced in Freedom in the last year or so) it seemed worthwhile publishing the polemic of 1960 as a supplementary volume to the Freedom Centenary Series for the years 1951-1964. No editing, either of the editorials or the correspondence, has been made.

In addition, an appendix is included of Martyn Everett’s Short History of Political Violence in Britain just as a reminder of how the State, even in a so-called democracy, reacts when opposed  non-violently and a second appendix of Malatesta’s writings on  Attentats and on Anarchism and Violence written in the early 1920s when revolution was in the air in post-World  War I Europe as well as nascent fascism. 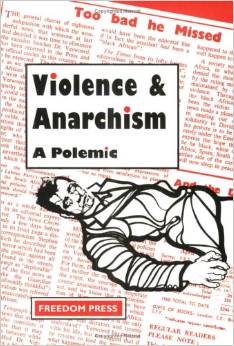