The Spectacle of Society

Writings by critila, rocinante, dot matrix, frere dupont, Alejandro de Acosta, Aragorn!, and others both stoned and unstoned. Part two of a three book series of the best pieces from The Anvil. The first is reviews by Alex Gorrion (The Totality is Incomplete); this book, selections specifically talking about pop culture, and the third book (yet to be released) on more intentionally political content. The Spectacle of Society includes pieces on Kanye West, Sons of Anarchy, Žižek, the Earl Brothers, Lady Gaga, David Bowie, Thomas Ligotti (from before he was a name in anarchist circles), Yukio Mishima, and many more. 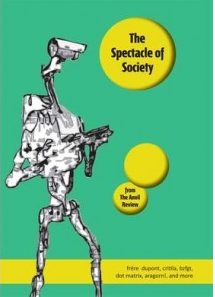