The Shadows Under The Lamp: Essays on September 11 and Afganistan

by Ronald Creagh and Sharif Gemie

From the blurb:
Our generation will never forget September 11. The surprise attack which killed thousands of ordinary people – office workers, caretakers, cooks, firefighters and paramedics – symbolised for many a clash between two cultures and profoundly affected world history.
The Shadows Under the Lamp is an analysis of this event and its origins. The Earthquake examines the evidence, the causes and the consequences, while The State Within THe State considers the attitude of the contemporary state towards terrorism. The first part of this book also looks at the media, American opinion, Islamic fundamentalism and the new American agenda.
The second part of this book, The Land of the Future, is a detailed essay on the recent history and current situation in Afghanistan, and argues for another way of understanding this country and its people – not ‘the passive recipients of tyranny’ but rather those who ‘have tried to create new freedoms’. 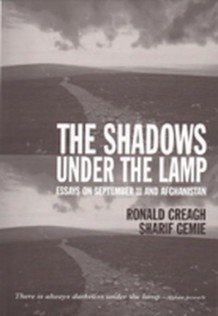