The mythology of business

This publication has been released by the Institute of Employment Rights to dispels some of the myths surrounding business and its supposed benefits.

‘The Mythology of Business’ provides a short, accessible and compelling exposé of ten of the most popular myths of these times. As David Whyte comments, these myths have a singular purpose: “to sustain corporate greed at the expense of the rest of us.” We have a duty to question these myths, to expose the lies that sustain them, and to challenge the politicians and opinion-formers who mindlessly repeat these myths despite the lack of evidence that any of them hold any meaningful truth.

According to the author, both the media and politicians present an unfalteringly pro-business agenda as central to a healthy economy, despite it having no evidential basis. This publication seeks to shed some light on the myths and lies that are being used to deny workers their rights and diminish collective bargaining power. 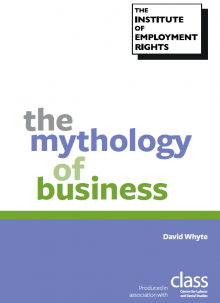