The Dossier of Subject No. 1218: A Bulgarian Anarchist’s Story

Of the few who managed to survive the horrors of Bulgaria’s Stalinist concentration camps, Alexander Nakov is possibly the most representative of the older generation of active and committed anarchists.

Initially reluctant to write his memoirs, Alexander was eventually persuaded by friends that his story needed to be told. And by telling that story, he now remains a vital link between the anarchist militants of the past and the youth of today.

In clear and concise prose, Alexander details his youthful activity, his subsequent imprisonment and his fierce resistance to an inhuman system.

As well as his memoirs, this book also contains official government and state security documents about the author – documents that give yet another insight into the anarchist Alexander Nakov, targeted by the “People’s State” and classified as “Subject No.1218.”

Translated from the Bulgarian original by Mariya Radeva, edited by Rob Blow, foreword by Nick Heath. 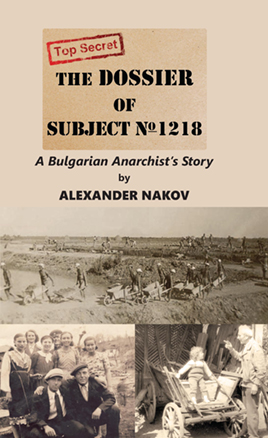