During 1889-1890, a strike wave swept across Britain hitting many major towns and cities. Bristol was not immune. The scale and intensity of industrial unrest in the city reached a level never experienced before. The city’s labour historian Samuel Bryher depicted Bristol at this time as ‘a seething centre of revolt’. This experience set in train a qualitative change in the organisation of workers; and salutary lessons emerged for consideration for those politically active in the newly formed socialist groups, in their quest to understand the significance of the strikes based upon their philosophical outlook. The self-confidence of workers grew substantially during this period. The emergence of new unionism, representing unskilled and semi-skilled labourers, women and men, was an expression of self-reliance providing an independent organisation for workers’ collective voice. And it was the first time that Bristol women workers would be able to join a general union on an equal footing to men.

This pamphlet, the first of two, charts the tumultuous period that began in September 1889 with a small strike at John Lysaght’s galvanised iron works and ended with a lockout of boot and shoe workers in late December 1889. It was a period that shook the local elite, raising hopes of a new era of labour relations and the potential for bring about a revolutionary change in society. It was also a turning point in the lives of those intimately involved in organising and agitating against poor working conditions, particularly Miriam Daniell, Helena Born and Robert Allan Nicol, members of the Bristol Socialist Society. 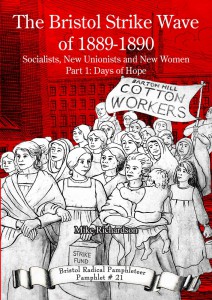