That is until he meets Otto, a charismatic young radical whose urge for cocks, communism, and a mysterious plot for the victory of the holetariat opens his eyes to a changing world. Finding himself thrown into a chaotic new political landscape of pigfucking PMs, frog-frenzied neonazis and falafel-throwing communists, Tom has to pick a side. Will he manage to find a third way to a safe seat, or will Corbyn’s terrifying red horde make his moderate mission impossible? And can Tom resist the most seductive of all highs — pure, high-grade socialism, main-lined straight into London’s clogged and throbbing veins? So much for a kinder, gentler form of politics!

Huw Lemmey is a writer and author. He writes on culture, politics and sexuality, and is the author of a novel, Chubz. He has written for Architectural Review, Guardian, Tribune, Art Monthly, the New Humanist, Rhizome, and L’Uomo Vogue, amongst others. 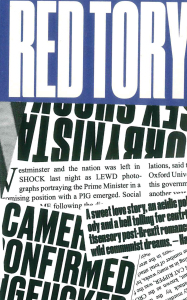