Pygmy Elephants: on the track of the worlds largest dwarfs Since the dawn of the twentieth century – and possibly earlier – reports came form the deep forests of Africa of ‘pygmy elephants’ as little as five feet (1.9m) tall at the shoulder.
There were pygmy elephant sightings, and alleged pygym elephant skulls and skins were sent to Europe’s museums. There were even some living elephants of the pygmy species Loxodonta Pumilio on display in zoos. Circus showman PT Barnum had pygmy elephant in his menagerie, and pygmy elephant sightings – with photos and film footage – continues into the 1980’s.
The author travelled to India to interview eye witnesses to kallana – the mystery five feet tall elephant whose name translates as stone elephant because it scrambles with such agility over rocks. The book includes photos of kallana never before reproduced outside of India.

Matt Salusbury tells us about vertically-challenged pachyderms both prehistoric and modern. Includes a special height chart for identifying different types. 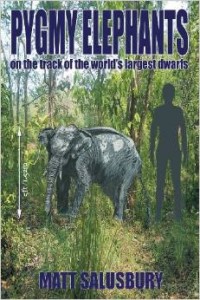