Prolegomena: To a Study of the Return of the Repressed in History

with illustrations by Clifford Harper

The Anarchist is a very fierce creature. It is first cousin to the gorilla. It kills emperors, kings, princes, presidents, likewise members of their families. It has long unkempt hair on its head and all over its face. Instead of fingernails it has long, sharp claws. The anarchist has many pockets in which it carries knives, pistols, bombs and dynamite. It is a night animal. After dark it gathers in groups, large and small, and plans raids and murders. The Anarchist does not like water. It never washes or changes its clothes. It is always thirsty and drinks beer and whisky. Papa does not like Anarchists a bit. They give him bad dreams. He has given orders to have them all caught and put in cages. I practice every day with my new rifle so that I can shoot these wild beasts when I grow up.

This collection of ‘ultra’ prose and poetry contains 300 years of outrage, passion, sarcasm and wit. First published a quarter of a century ago at the heightof the rebellious ’60s, it has been scarcely known outside of the anarchist milieu. Re-issued here for the first time, in a new edition edited and introduced by the artist Clifford Harper, who has also produced fifteen illustrations for the book, Prolegomena will now reach the audience it deserves. 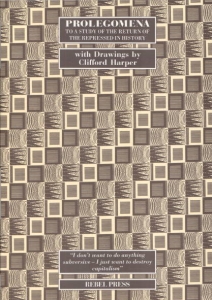