Our Enemies In Blue

Freddie Gray. Walter Scott. Eric Garner. Michael Brown. Tamir Rice. Akai Gurley. Azelle Rodney. Rekia Boyd. Mark Duggan. Ian Tomlinson. Oscar Grant. Jean Charles de Menezes. Dannette Daniels. Blair Peach. Harry Stanley. Kevin Gately. This heart-wrenchingly partial list could go on, and on, and on: all people who have been killed by police – whose killers, for the most part, have faced little or no legal consequence for their actions, despite all being situations that would see civilians charged with murder. The list of those grievously brutalised by police would be far, far longer still – but that data is often not even available, as it is so commonplace, and complaints so seldom even raised.

We have reached a point in history where the systemic nature of police brutality can hardly be denied – and yet, many deny it. Each new case, they say, was perpetrated by a mere “bad apple” on the force (evidently forgetting the rest of the expression). In Our Enemies in Blue, Kristian Williams gives the lie to that assumption, with incisive analysis and rigourous scholarship. Though his focus is on US policing, the same problems are echoed in police forces in the UK and around the world, and the same analyses will apply.

First published in 2007, it has been fully revised and updated to include new statistics and scholarship on the issue, as well, of course, as analysis of events since 2007.

Kristian Williams is the author of American Methods: Torture and the Logic of Domination, Hurt: Notes on Torture in a Modern Democracy, and Fire the Cops! He was one of the editors of the collection Life During Wartime: Resisting Counterinsurgency. 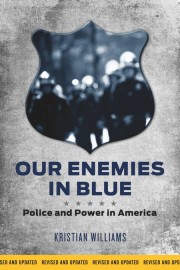