We face a climate crisis and a crisis of pay and employment for millions of working people – but there is an alternative.

Unless decisive action is taken in the next few years, climate change will become irreversible and catastrophic. Already droughts and more intense hurricanes and typhoons are affecting communities around the world and pose the prospect of rising food prices and the greater risk of flooding for us in Britain. But politicians dither and consistently refuse to reach a binding international agreement on reducing emissions.

At the same time working people are paying the price for an economic crisis they did not cause by suffering job insecurity and reduced income levels. Just under two million people are unemployed – a million of them young people. Currently, only 1 in 40 new employee jobs are on secure full-time contracts. Low pay, unemployment and benefit cuts mean that a million families in Britain have to choose between heating their homes adequately in winter or having regular meals.

The One Million Climate Jobs report produced by the Campaign against Climate Change Trade Union group and backed by eight national unions shows that, for a relatively small amount, we can tackle all these problems. We can create a million secure Government jobs in renewable energy, in increasing energy efficiency by insulating homes and public buildings free of charge, in hugely expanding cheap public transport to get people and freight onto cleaner forms of transit, and in developing the “green skills” that we need through education and training.

A million decently paid Government jobs, and the spin-off of half a million additional jobs that this would create, could kick-start the economy. It is the alternative both to austerity and to Government inaction as the world slides towards climate catastrophe. 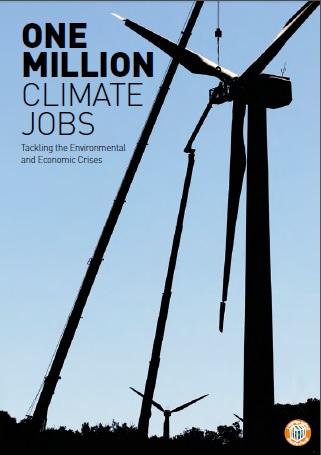