Marshall Law: The Life & Times of a Baltimore Black Panther

In 1970, the feds framed Eddie Conway for the murder of a Baltimore City Police officer. He was 24 years old. They threw him in prison, took him away from his family, his friends, and his organizing, and tried to relegate him to a life marked by nothing but legal appeals, riots and lockdowns, transfers from one penal colony to the next. But they failed.

Marshall Law is a poignant story of strength and struggle. From his childhood in inner-city Baltimore to his political awakening in the military, from the rise of the Black Panther Party to the sham trial, the realities of prison life, escape attempts, labor organizing on the inside, and beyond, Eddie’s autobiography is a reminder that we all share the responsibility of resistance, no matter where we are.

It also brings to light important details about the FBI’s infiltration of the Black Panther Party. As Eddie makes clear, the FBI had already placed agents deep inside the Panthers’ leadership well before Stokeley Carmichael’s group in Canada was infiltrated, long before the brutal murder of Fred Hampton. It’s all here … and much, much more.

Marshall “Eddie” Conway is the former Minister of Defense of the Baltimore Black Panther Party. In 1969, he uncovered evidence of the FBI’s infiltration of the Panthers as a part of the COINTELPro initiative, and found himself locked away, just one year later, convicted of a murder he did not commit. Currently in his fortieth year of incarceration in a State of Maryland correctional facility, he has played a leading role in a variety of prisoner support initiatives, including the formation of the Maryland chapter of the United Prisoner’s Labor Union, and the ACLU’s Prison Committee to Correct Prison Conditions. 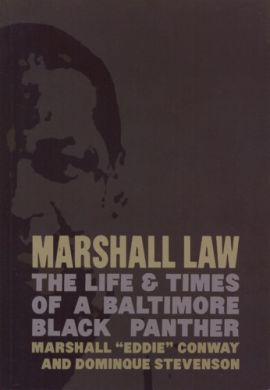