“… an excellent step… moving from insightful analysis of co-optation not into defeatism, but a renewed spirit of revolt.” Stevphen Shukaitis

Democracy was once a considered dangerous new idea and a threat to ruling elites. It brought to mind fearful images of oppressed masses demanding social and political equality. Fast forward to today and democracy is a key method by which the inequality and injustices of capitalism are legitimated and popular consent engineered. Despite the fact that capitalism can tolerate neither equal access to decision-making or truly open dissent, and in fact prioritises profit-making above all social or environmental concerns, we are nonetheless persuaded to believe that capitalism is, or at least can be, democratic. Now a new book – published by Corporate Watch – uncovers how this contradiction is sustained, and the anti-democratic rule of capitalism protected.

Managing Democracy, Managing Dissent comprises of twenty essays – written by writers, academics and activists and edited by Corporate Watch researcher Rebecca Fisher – which collectively argue that in today’s ‘democracy’ elite interests are served by the limitations placed upon popular participation in decision-making, by the manipulation of public opinion through propaganda, and from the attempts to co-opt, marginalise and/or repress oppositional politics. This ground-breaking book reveals how despite its inherently anti-democratic nature, global capitalism is dependent upon the manipulation of the concept of democracy to survive. It thus exposes a potential weakness at the heart of capitalism, which activists and campaigners can usefully target in their struggle against oppression and environmental destruction. 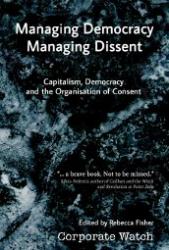