The life and times of Lucy Parsons, early American radical and labor organizer, told definitively here.
Lucy Parsons’ life energy was directed toward freeing the working class from capitalism. She attributed the inferior position of women and minority racial groups in American society to class inequalities and argued, as Eugene Debs later did, that blacks were oppressed because they were poor, not because they were black. Lucy favored the availability of birth control information and contraceptive devices. She believed that under socialism women would have the right to divorce and remarry without economic, political and religious constraints; that women would have the right to limit the number of children they would have; and that women would have the right to prevent legalized” rape in marriage.

Lucy Parsons’ life expressed the anger of the unemployed workers, women, and minorities against oppression and is exemplary of radicals’ efforts to organize the working class for social change.”
From the preface

Lucy Parsons, who the Chicago police considered more dangerous than a thousand rioters,” was an early American radical who defied all the conventions of her turbulent era as an outspoken woman of color, writer, and labor organizer. Parsons’ life as activist spanned the era of the Robber Barons through the Great Depression, during which she actively campaigned and organized for the emancipation of the working class from wage slavery. Parsons courageously led the defense campaign for the Haymarket martyrs,” including her husband Albert Parsons. Ashbaugh’s biography takes a giant leap toward reinterpreting the role of women in American history. 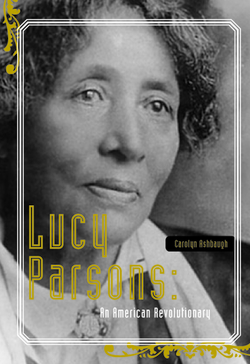