From the blurb:
‘My major influences founded no parties. None of them started wars nor took part in governments. None of them inspired other people to hate each other. All were utter failures in the entrepreneurial culture. But in my experience not a day passes when I fail to recall the influence of one or other of them … ‘

Colin Ward has been a quiet influence in many environmental and social fields. In his new book he shows how nine individuals have particularly shaped his thinking. Looking at often unfamiliar aspects of their lives and work, he discusses the radical views on education of William Godwin & Mary Wollstonecraft; the political ideas of the Russian emigre Alexander Herzen; Peter Kropotkin’s simple yet profound economic thinking; the social philosophy of Martin Buber; the influential architectural ideas of William Richard Lethaby and walter segal; and finally, the contribution of Patrick geddes and Paul Goodman to the field of planning.

Like the author himself, these writers, thinkers and activists were all voices of dissent and scepticism in their time. Influences demonstrates the continuing importance of their visions and ideas. 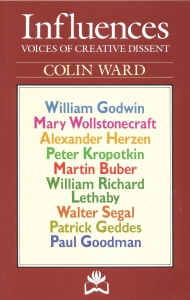