In Contempt of All Authority: Rural Artisans and Riot in the West of England

In Contempt of All Authority
Rural Artisans and Riot in the West of England, 1586-1660

Two of the most common types of popular disorders in late Tudor and early Stuart England were the food riots and the anti-enclosure riots in royal forests. Of particular interest are the forest riots known collectively as the Western Rising of 1626-1632, and the lesser known disorders in the Western forests which took place during the English Civil War. The central aims of this volume are to establish the social status of the people who engaged in those riots and to determine the social and economic conditions which produced the disorders.

The leaders and most active participants in riot were rural artisans — skilled men working in non-agricultural employments. These artisans, particularly those in the major industries of seventeenth-century England located in the forested West, were largely wage-earners. Virtually landless cottagers who relied on the market for food, clothworkers and other artisans frequently engaged in food riots and attempted insurrections during times of depression or harvest failure. These artisans exploited the common waste of the royal forests. Enclosure of the forests by the Crown threatened the livelihood of those workers who depended on the forests for raw material and pasturage. The result was the Western Rising, a series of massive anti-enclosure riots which took place in Gillingham Forest on the Wiltshire-Dorset border, Braydon Forest in Wiltshire and the Forest of Dean in Gloucestershire. There were also concurrent riots in Leicester Forest, and Feckenham Forest, Worcestershire. A similar series of riots followed in the 1640s.

These conclusions challenge the dominant modern view that work in rural industry was merely the by-employment of members of peasant households. Contrary to the prevailing interpretation that disaffected men of standing were generally behind disorders such as the Western Rising, manipulating popular grievances for their own ends, In Contempt of All Authority concludes that in times of economic and social distress or political dislocation (such as the Civil War) the “lower orders” of Tudor and Stuart England were provoked into self-organised direct action by very basic issues of food supply, employment, and common rights. In the course of such actions they manifested an intense hatred of the gentry and the well-to-do, whom they held responsible for existing conditions. 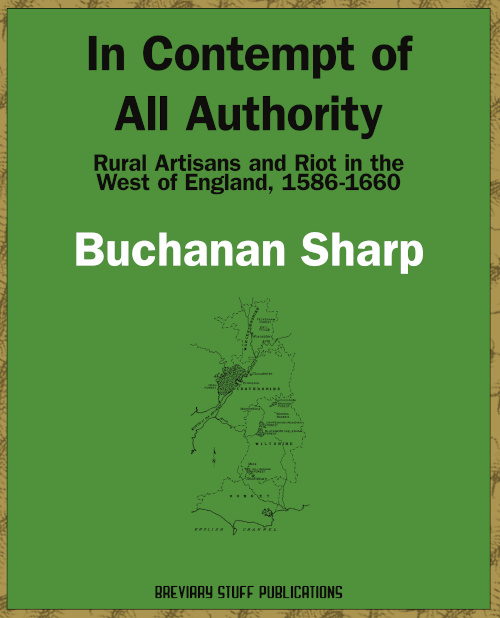