Expect Resistance is not one but three books, each of which may be read as a complete work unto itself. The first book, printed in standard black ink, continues the inquiry into modern life and its discontents begun in Days of War, Nights of Love. Just as that book included improved versions of texts originally published between 1996 and 1999, this book draws on CrimethInc. material from 2000 to 2004, painstakingly refined and augmented with a great deal of new content. The second book, in red ink, is a composite account, related by three narrators, of the adventures and tribulations that inevitably ensue when people pursuing their dreams enter into conflict with the world as it is.

Together these comprise a third book, an exploration of the complex relationship between ideals and reality. Expect Resistance is a field manual for a field on which all manuals are useless, a meditation on individual transformation and collective resistance in disastrous times, and a masterpiece that raises the bar for radical publishing. 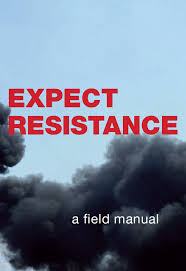