Don’t You Believe It!

“WE ARE NOT AMUSED’ is perhaps the only thing everyone knows Queen Victoria said. But did she? If so, when and why? And was she ever amused?

NOSTRADAMUS PREDICTED THE FUTURE. Very many people, if not ‘everybody’, believes this. But is it actually true? Who was Nostradamus and what did he actually do?

WE ONLY USE TEN PER CENT OF OUR BRAINS. This claim is found all over the place, supposedly supported by ‘recent research’, or Einstein, or ‘experts’. Is there any truth in it? How did it arise?

THE WRIGHT BROTHERS MADE THE FIRST HEAVIER-THAN-AIR FLYING MACHINE. Most people surely would agree. In fact there were others, on whose work the brothers successfully built.

Many ideas are assumed to be true, when the actual facts are rather different, or in some cases completely otherwise.

John Radford explores, and Donald Rooum illustrates, a host of popular beliefs, all held by very many people, if not literally ‘everybody’. Some have an element of truth, some are distorted versions of the truth, some completely false. 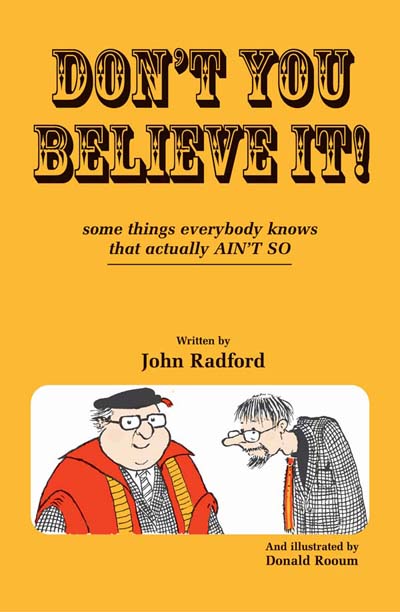