The UK’s Home Office has used specially chartered flights to deport rejected refugees and migrants en masse for 12 years now. Charter flights are becoming the standard method of conducting enforced deportations to a growing list of destination countries. There is now at least one flight a week to ‘popular destinations’, such as Afghanistan, Pakistan and Nigeria, which are often closely linked to the UK’s most controversial foreign policy adventures.

The policy was introduced in 2001 ostensibly to save ‘taxpayers’ money’ and effect ‘volume removals’ of people who refuse to ‘cooperate’ with the immigration authorities. Officials have also claimed the programme was designed to send a clear message, both to the British public and to migrant communities, that the UK is serious about enforcing its ‘tough’ immigration policy. Yet, the programme was, and is still being, sold to the public on the basis of unfounded myths and outright lies, which have gone unchallenged for far too long.

This report, examines in detail each of these and other deceptions underpinning the programme and debunks them using previously unpublished data covering the first 10 years of the programme. The sources range from Freedom of Information requests, statistical analysis of official figures, court cases, to government and media reports, in addition to case studies based on testimonies from migrants deported on these flights or organisations that worked with them.

Having debunked the myths, the report’s authors, Phil Miller and Shiar Youssef, then attempt to unravel the ‘ulterior motives’ behind the UK’s deportation charter flights, bringing to light little-known statements by government officials, secretive meetings and agreements and dodgy political deals. The motives examined range from a targets culture introduced by Labour and maintained by the current, Conservatives-led coalition government, to political agendas revolving around the UK’s foreign policy and disciplining migrant diaspora communities.

The next section explores a number of important legal questions concerning mass deportation flights, delving into the murky depths of European and UK case law, international treaties and other legal instruments. Among other things, the authors argue that deportation charter flights constitute a de facto policy of ‘collective expulsion’ and must, therefore, be prohibited. Even without this, a number of procedural issues that can be used to challenge the legality of these flights are also explored in detail. This is followed by two short sections on specific issues with significant legal implications: overbooking and the use of ‘reserves’, and the more recent use of monitors and doctors on mass deportation flights.

It is important to remember that, unlike deportations by commercial flights, there are no other commercial and procedural barriers to the exceptional, brutal policies and practices surrounding mass deportation charter flights. There are also no other passengers to witness what happens on these flights – unlike the unlawful killing of Jimmy Mubenga, which took place in full view of British Airways customers, leading to a damning inquest verdict on the use of fatal restraint techniques. On charter flights, immigration officers and private security guards can virtually get away with anything, as they often do, in order to enforce the government’s ‘tough’ immigration policy. Hence, this report not only calls for the immediate halt of the deportation charters programme on the basis of detailed factual findings and legal arguments, but also challenges different practices and procedures that have been institutionalised or taken for granted during the 12 years of this shadowy programme.

To achieve this, we would like to bring together as many campaigners and legal practitioners interested in these issues as possible, and explore ways in which they can collaborate and work together more effectively in order to stop these flights. This is particularly important now, in the context of mass deportations becoming an integral part of the UK’s ‘immigration management’ regime, a regime that has recently seen new worrying and xenophobic developments, such as regular immigration checks on the street and the ‘go home’ advert vans. Mass deportations, using specially chartered aircraft away from the public gaze, are a logical extension of this drive to get rid of as many unwanted migrants as possible by any means possible. 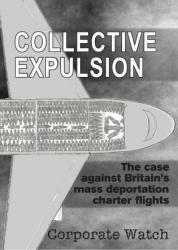