Chomsky: Oracle of the state

This pocket book version of an Amsterdam based booklet is an “Assorted box of anarchist critiques of Noam Chomsky! Heretical? Hopefully interesting.

The essays collected in this booklet are posts and articles from The Rancid Honeytrap and the Anarchist Library, which, as of the time of this printing, can be found here: ohtarzie.wordpress.com and theanarchistlibrary.org respectively, lastly we‘ve added an article from Libcom, reacting to one of Chomsky‘s more recent quotes about the radical left.

So why have we extracted these words from cyberspace and put them here in your hands?

It’s because criticism of Chomsky is so incredibly rare, in print and online. In fact, it can be a rather lonely experience to harbour suspicions that Chomsky – “the world’s top public intellectual” – could be wrong about something … or even worse, that he is intentionally harmful to struggles against oppression.

How could anyone have these suspicions of such a person as Chomsky, you ask?

First of all, we get it, Chomsky has been important. He might have been your gateway drug to radicalism. He has written vast amounts about the terrifying realities of U.S. imperialism, the Israeli occupation of Palestine, the threat of nuclear war, or the surveillance state, there are many useful books published with Chomsky’s name on them. His small publication “9/11,” published in 2001, in which he calls the United States “a leading terrorist state” sold hundreds of thousands of copies and damns the militant response to 9/11 by the U.S. That booklet played a major role in shaping people’s perspectives on the world-shifting emergencies of that decade. Of course, there is also “Manufacturing Consent,” co-authored with Edward Herman, a book that remains almost biblical as a resource for understanding media as a means for selling wars of empire.

So what could be the problem? 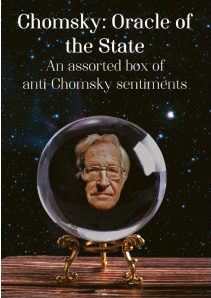