Censured: The prejudice faced by biracial GI babies and their mothers

Mike Richardson’s intriguing account of his aunt, Beatrice Richardson and her biracial daughter Gillian, brings into stark relief the racism and sexism that existed in Britain during and after the Second World War.

Sexual relationships between white British women and black American soldiers were regarded with disapproval both in the governing establishment and among many ordinary people. The women, the men and their children faced innumerable obstacles.

Censured reveals the extent to which the African-American press was at the forefront in resisting the treatment of biracial children and contesting the racist assumptions towards them. Headlines like ‘BROWN BABIES: Britain wants to Get Rid of Them’ were part of a sustained campaign challenging attitudes and policies rooted in Britain’s own history of racism and imperial arrogance.

Segregation and discrimination in the US did little to inspire confidence that America could offer a promising future. Richardson’s research into Gillian’s life-story illuminates and adds to a much larger history of a generation of children growing up against widespread prejudice on both sides of the Atlantic. 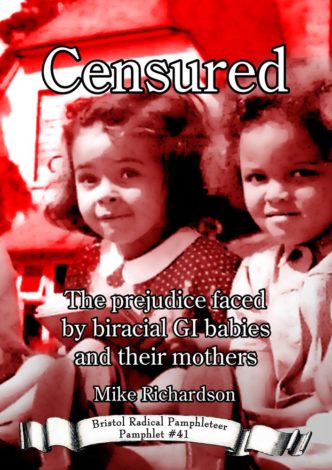