British Imperialism and the Palestine Crisis

With contibution from various authors, including Emma Goldman, these selections from War Commentary and Freedom give the anarchist view on British dealings in Palestine and the Middle East, from the Balfour Pledge of 1917 for a Jewish national home to the UN partition of Palestine in 1947. With an additional postscript on the later years of the state of Israel. 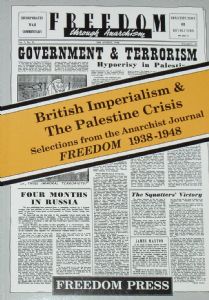