From the blurb:
The Nechaev period of Michael Bakunin’s career (1869-1872) was relatively brief. Yet, apart from being a fascinating psychological drama, it forms an important chapter in the history of the Russian revolutionary movement, posing fundamental questions of revolutionary tactics and revolutionary morality with which radicals have continued to grapple to this day. Bakunin’s relationship with Nechaev was also a contributing factor in his famous conflict with Marx and his expulsion from the First International. It led him to a re-examination of his revolutionary doctrines and to a reassertion of his libertarian principles as against what he called the “Jesuitism” and “Machiavellianism” of his young disciple. We are therefore greatly indebted to Arthur Lehning and Michael Confino (see Biographical Note) for making available the necessary materials for a reappraisal of the Nechaev affair, which is the object of the present essay. 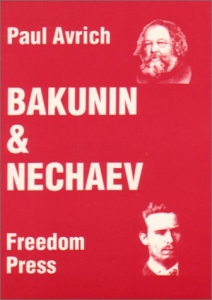