In June 1985, Diana Block, her two-week-old son, and five companions fled Los Angeles after finding a surveillance device in their car. Facing the possibility of arrest because of her militant activities in the struggle for Puerto Rican independence, Diana spent the next decade living underground: on the run from the FBI, raising two children, and juggling security, solidarity, and motherhood.

In a perfect demonstration that the personal is political, Diana’s memoir offers insights into efforts to build homegrown clandestine resistance to US imperialism. With emotional depth and a poetic style, the book brings a woman’s perspective to a subject typically dominated by heroic, male discourse. It also traces Diana’s political development on either side of her period underground, offering a history of the culture and politics of the 1960s and 1970s-especially the decisions that led many to take up arms against the US government—and an analysis of the political terrain of the 1990s, when she resurfaced and tried to reintegrate into a very different world.

Diana Block has been an activist for forty years. She has written for political journals and women’s magazines, and currently edits The Fire Inside, the newsletter of the California Coalition for Women Prisoners.

“Diana Block’s Arm the Spirit is a stunning piece of work with pitch-perfect voice and strong writing. She gives voice to many of us who took up the vocation of revolution and who have remained true to the vision of a radically transformed world.”—Roxanne Dunbar-Ortiz, author of Blood on the Border

“Arm the Spirit is one woman’s tale of wanting a better world, struggling to bring that vision to fruition and then literally having to flee for her life. It is a story of internal exile that holds lessons for us all, particularly…when a “war on terror” has so often become a war against our own best citizens. Block’s telling is helped by beautiful poetry and resistance to dogma. This is truly a story for every reader.”—Margaret Randall, author of Stone Witness

“Diana Block elaborates a true definition of solidarity-both in words and in deeds. This is a story of victory and the will to confront a difficult life without remorse or victimization. Block offers a snapshot of many pains, sufferings, and challenges, but most importantly, she articulates a powerful lesson: life is most fully lived, when lived for others.”—José E. López, Executive Director, The Puerto Rican Cultural Center, Chicago 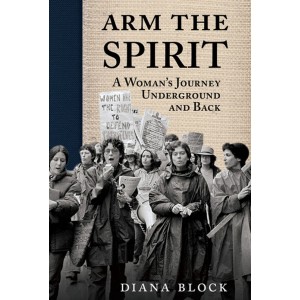