“Eleven years ago, when I was in a small-town Illinois high school, I had never heard of the word “anarchism” — at all. The closest I came to it was knowing that anarchy meant “chaos”. As for socialism and communism, my history classes somehow conveyed the message that there was no difference between them and fascism, a word that brought to mind Hitler, concentration camps, and all kinds of horrible things which never happened in a free country like ours. I was subtly being taught to swallow the bland pablum of traditional American politics: moderation, compromise, fence-straddling, Chuck Percy as wonder boy. I learned the lesson well: it took me years to recognize the bias and distortion which had shaped my entire “education”. The “his-story” of mankind (white) had meant just that; as a woman I was relegated to a vicarious existence. As an anarchist I had no existence at all. A whole chunk of the past (and thus possibilities for the future) had been kept from me. Only recently did I discover that many of my disconnected political impulses and inclinations shared a common framework — that is, the anarchist or libertarian tradition of thought. I was like suddenly seeing red after years of colourblind grass.” 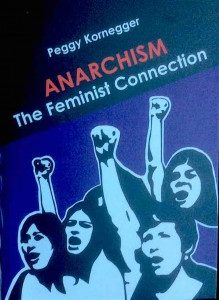