A Glorious Liberty: the ideas of the ranters

A Glorious Liberty The ideas of the Ranters. By Past Tense Publications.

The Ranters formed the extreme left of the sects which emerged during the English Revolution and Civil War. Most contemporary writing about them was hostile and often the worst sort of gutter journalism. However Morton is able to assume that their strength lay in poorer areas of London as well as throughout the rest of England and that they also had sympathy among former Levellers inside and outside the Army. He believes that this suggests a movement mainly of the towns, with support from the wage earners and artisans rather than the peasants. It was never a real threat to the rulers. Rather, he feels, it presents a movement of political defeat after the setback of the efforts of the Diggers and Levellers. Their beliefs entailed waiting for God the Great Leveller who would come upon the rich like a thief in the night, with the practical outcome that the poor might as well enjoy themselves as much as possible in the waiting period by eating, drinking and being merry.

As such, this was a welcome reaction to the grim Calvinism of the Puritans and Cromwell, but could lead nowhere. In some of the writings of the Ranters who produced pamphlets can sometimes be found as Morton says, a “ deep concern for the poor, a denunciation of the rich and a primitive biblical communism that is more menacing and urban than that of Winstanley and the Diggers’.

See other Past Tense publications here. 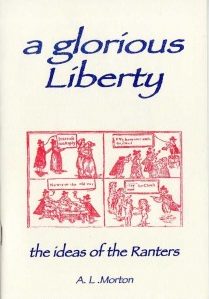