From the blurb:
One hundred and eighteen 32-page issues of Anarchy appeared during the ten years of its publication – some 4,000 pages. The present volume contains less than 10% of that material. The choice of material was left to Colin Ward who was the editor of Anarchy throughout those ten years and he has classified his selections under six headings:
Restatements in which a number of anarchists seek to link anarchist thought to the contemporary scene; Experiences which are descriptions of the human condition in different parts of the world as witnessed by the writers; Work consisting of four detailed essays ranging from the practical experience of the Gang System in Coventry to the theoretical future of work; Education the ever topical subject with contribution among others by Paul Goodman and Harold Drasdo; Deviance yet another burning topic of the day with contributions from Tony Gibson and Stan Cohen; and lastly Environments – all topics which Anarchy was discussing in the ‘60s and which are the order of the day worldwide in the ‘80s. 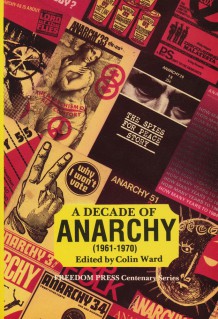